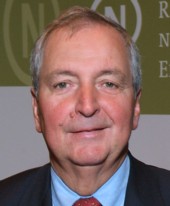 As an assistant professor of economics at the University of Münster from 1965 to 1971, Dr. Töpfer received his doctorate in 1968 and was head of the economics department at the Institute for Spatial Planning there in 1970 and 1971. Subsequently, he was head of the Planning and Information Department in the State Chancellery of Saarland until 1978. In 1978, Dr. Töpfer accepted an appointment as full professor at the University of Hanover, where he served as director of the Institute for Spatial Planning and Development until 1979.

Dr. Töpfer is a recipient of the Order of Merit of the Federal Republic of Germany (1990) and has received various other awards, including the German Environmental Award (2002), the CSR Award of the Federal Government (2015) and the Order of Merit (2015) and the State Award (2019) of the State of North Rhine-Westphalia. Dr. Töpfer has been described as an "advocate for developing countries."

He is regarded as a mediator between conflicting interests with an eye for what is feasible, who recognized globalization early on - an "honest broker" in the global reconciliation of interests. The honorary citizen of Shanghai has also left his mark on the national level. He played a decisive role in shaping the environmental protection policy of the Federal Republic of Germany. For him, economy and ecology were and are not contradictory. The person of Dr. Töpfer is a manifestation of the successful development of environmental protection over the past two decades - both nationally and internationally.

He was a member and most recently Vice Chairman of the German Council for Sustainable Development from 2001 to 2010, Vice President of Welthungerhilfe from 2008 to 2012, and founding Director of the Institute for Advanced Sustainability Studies (IASS) in Potsdam until 2015. In 2011, Dr. Töpfer assumed the chairmanship of the German government's Ethics Commission for a Secure Energy Supply. The commission was established by the German government as a result of the Fukushima nuclear disaster. Since 2014, he has been chairman of the German part of the UN Sustainable Development Solutions Network. Furthermore he is patron of the German-Russian Raw Materials Forum and the non-profit organization "atmosfair."