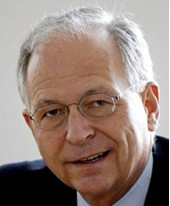 Chairman of the Munich Security Conference

Wolfgang Ischinger is the Chairman of the Munich Security Conference and was Global Head of Government Relations, Allianz SE, Munich (2008 to 2014). From 1998 to 2000, he served as Deputy Foreign Minister. From 2006 to 2008, he was the Federal Republic of Germany's ambassador to the UK, and before that the German ambassador to the US for almost five years. In 2007, he represented the European Union in the troika negotiations on the future of Kosovo. He is also Chairman of the Ambassadors Advisory Board of the Executive Council on Diplomacy in Washington, D.C.

Wolfgang Ischinger studied law at the universities of Bonn and Geneva and obtained his law degree. With a grant from the German Academic Exchange Service DAAD he continued studying international law, foreign economic relations and history at the Fletcher School of Law and Diplomacy and at Harvard Law School, Cambridge / USA. From 1998 to 2001 he was the Deputy Foreign Minister. His long career in the German Foreign Service gave him specific expertise in international negotiating processes, having been involved with the Bosnia Peace Talks at Dayton, Ohio and negotiations on NATO enlargement and the Kosovo crisis.

Wolfgang Ischinger is an experienced German diplomat with the current mandate as Chairman of the Munich Conference on Security Policy to bring people together to discuss the central security issues of our time. Having published widely on foreign and security policy in German, English and French, he is ideally placed to offer insights from his unique perspective.

In his invaluable and eloquent presentations, Wolfgang Ischinger stresses the importance that we make the best possible use of the strategic opportunities that lie before us to strengthen US-European cooperation across a wide spectrum of issues of common concern.

He presents in German and English.