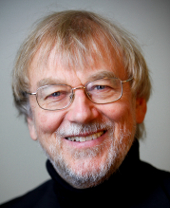 Jakob von Uexküll is a German-Swedish author, lecturer, visionary and was a member of the EU Parliament. He is founder of the Right Livelihood Award, commonly known as the ‘Alternative Nobel Prize’, that is awarded annually to alternative humanitarian, social and ecological projects. He is also co-founder of the Alternative World Economic Forum and founder of the World Future Council (WFC), a body of 50 globally recognised wise elders, pioneers and youth leaders, which is committed to a responsible and sustainable thinking and action in the interests of future generations.

After schooling in Sweden and Germany, Jakob von Uexküll graduated with an M.A. (Honours) in Politics, Philosophy and Economics from Christ Church, Oxford. He served on the Board of Greenpeace Germany, the New Economics Foundation London and founded in 1997 the WFC – a Think-Tank committed to a sustainable and ahead thinking and global acting. The WTC comprises members from government, business, science and culture from all over the world.

With his highly respected awards honouring outstanding work in the fields of ecology, peace, human rights, democracy or poverty alleviation, Jakob von Uexküll gives valuable insights into global environmental issues, their impact on the society and global economy and what people can do differently.

In his presentations, Jakob von Uexküll powerfully speaks up for the future generations addressing important global issues. In everything he does remains focused on the future, giving voice to the interests of coming generations and working for a sustainable future.

He presents in German and English.