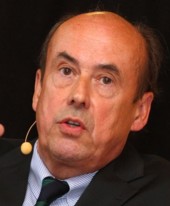 Leading authority on the future and innovative strategic thinking

The social scientist, philosopher and cultural theorist Bernhard von Mutius is a leading authority on the current transformation of corporate and social life and an innovative strategic advisor of major companies, social organisations and political institutions. He has won a wide audience both as a writer and as the brain behind major international conferences on the future. He is also a fascinating speaker whose visions of the future inspire both national and international audiences.

Bernhard von Mutius’ conceptualisations of processes of renewal in business and society and of the new type of leadership in the knowledge society attract wide interest among those concerned with innovation in both the corporate and political sphere. His most recent work „Kopf oder Zahl“ has been published published 2007. His last book „Die andere Intelligenz. Wie wir morgen denken werden“ (Klett-Cotta 2004) was listed on the Financial Times Deutschland Best Books list for several months. In his book "Die Verwandlung der Welt. Ein Dialog mit der Zukunft" (Klett-Cotta 2001), von Mutius presents a multidimensional exploration of the current global transformation of business, society and culture.

After graduating in philosophy, history, political and economic science, Bernhard von Mutius lectured on the European history of ideas and science. He has been engaged in independent research and acted as a consultant to German and international companies, including BMW, Deutsche Bank, IBM, Siemens and Credit Suisse, for more than twenty years. Dr. von Mutius founded the interdisciplinary Bergweg-Forum Denken der Zukunft in 1989, which focuses on the study of innovation processes. He is a co-founder of the corporate citizenship network "Unternehmen: Partner der Jugend" established in 1995. Together with Prof. Dr. Hans-Jörg Bullinger and the Fraunhofer Institut IAO, he founded the Stuttgart Management Symposia in 1995. He is the scientific advisor of the Johannisberg Conferences and of many other leadership dialogs on the future in Germany, bringing together representatives of science, business and the cultural sphere. Bernhard von Mutius is acclaimed as one of Germany’s foremost thinkers on the future.