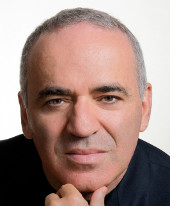 Garry Kasparov is widely considered the greatest player in the history of chess. He is known for his uncanny intuitive play and lightning-fast vision of the board. Always looking for new challenges he has astounded the chess world by beating some of the world’s strongest Olympic chess teams sometimes playing 6 Grandmasters simultaneously.

Drawing upon the parallels in the game of chess, Garry explains to audiences how businesses can benefit from strategic planning, adaptability and creativity to enhance their own performance.

At age 13 Garry began entering international competitions and by the time Garry was 16, his reputation in the Soviet Union had grown to the point that he could no longer expect to enter tournaments unnoticed. He was now seen as a formidable competitor by older and more experienced players, both inside the USSR and internationally.

At the age of 21, Garry played for his first world title against the legendary Soviet player Anatoly Karpov. He beat Karpov to win his first World Championship, a title he has held for an unprecedented 18 consecutive years.

Garry has been in the forefront of the use of computers in chess. In 1996 and 1997, he played IBM’s supercomputer, Deep Blue, an important scientific and social experiment. The result was one win for Kasparov and one win for IBM.

He has written a number of books and has gained international recognition as a prominent spokesman for political, educational and social reforms in Eastern Europe. He is also active in charity and has created the Kasparov Foundation in Moscow (the first private Foundation since the Revolution) to handle this side of his activities. He is active in promoting the use of chess in schools as an educational subject and has set up the Kasparov International Chess Academy.

Widely recognized as an expert on Russian affairs, he is the youngest-ever contributing editor for the Wall Street Journal. In 1993, Kasparov and Short helped form the Professional Chess Association (PCA) to create "a new era for professional chess and to make our sport a household game."

Garry’s speeches are as dynamic and as fascinating as his chess and he is a regular participant at leading international conferences including the World Economic Forum at Davos and the Cursos de Verano in Madrid.