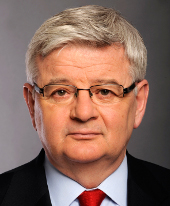 Joschka Fischer served as Germany´s Minister of Foreign Affairs and Vice Chancellor from 1998-2005. Throughout his seven-year tenure as Foreign Minister and the leading figure of the German Green Party, Joschka Fischer was arguably the most popular politician in his nation. From 2006 to 2007 Joschka Fischer held a professorship at the Woodrow Wilson School of Public and International Affairs at Princeton University. Since 2008, he has been employed with the Albright Group, a Washington, DC, consulting firm led by Madeleine Albright.

Upon his appointment as Minister of the Environment and Energy for Hesse in 1985, he was the first German Green to assume a government post. From 1987 to 1991, Fischer served in various capacities in the Hessian State Assembly; from 1991 to 1994 as Hessian Minister for the Environment, Energy, and Federal Affairs; and from 1994 to 1998 as Parliamentary Spokesman for the Green party in the German Bundestag, the Federal Parliament.

Joschka Fischer is greatly admired for his personal integrity, charisma and pivotal position in critical national dialog about his country's role in European integration. He offers audiences tremendous insights into international political developments and the socio and business scene. Fischer also demonstrates what it takes to successfully negotiate on the international platform.

His leadership skills and his outstanding rhetoric qualities have made Joschka Fischer one of the most requested political speakers across the globe.

He presents in English and German.