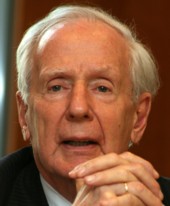 Dr Klaus von Dohnanyi is a leading member of the German Social Democratic Party (SPD), a former President of the Senate and First Mayor in Hamburg. After the fall of the Berlin Wall and with German unification, Klaus von Dohnanyi became involved with the restructuring programme in East Germany, and from 1993 to 1996 was a special adviser on Market Economy and State to the Board of the Treuhandanstalt and BvS, its successor company, responsible for privatising state-owned companies in the former East Germany.

After studying law at the universities of Munich, Columbia, Stanford and Yale, he started his career working at the Max-Planck-Institute for Civil Law. He then moved to Ford Motor Company, the car manufacturer, working for the company in both Detroit and Cologne where he was head of the Planning Division. From 1960 to 1967 Dohnanyi was a Managing Partner of the Institute for Market Research and Management Consulting in Munich.

Dr Dohnanyi offers great insights into a variety of subjects and his in depth knowledge of European and global affairs, together with his understanding of their direction and consequences, has made him a much sought after speaker. In his presentations he skilfully highlights the business opportunities in an ever expanding Europe.

An experienced speaker and recognised expert in his field, Dr Dohnanyi’s high content presentations are prepared to precisely meet clients’ needs and always include a highly informative question and answer session.

He presents in English or German.