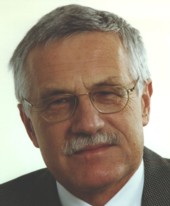 On February 28, 2003 Vaclav Klaus was elected President of the Czech Republic. A highly awarded politician and economist, Václav Klaus also served as Czech Prime Minister from 1992-1997.

Prof. Klaus was part of the initial wave of post-communist reformers who rose to power following the fall of communism in Central and Eastern Europe. Decision makers eager to do business with Eastern European countries are educated and entertained as he explains how he became the architect for what would be seen as a model for transforming a state-run economy to capitalism.

In March 1996, Václav Klaus was elected as Vice-Chairman of the European Democratic Union. From December 1989 to July 1992, he served as the first non-communist finance minister after more than forty years of communist rule. In October 1991, he became the Deputy Prime Minister of Czechoslovakia and in June 1992 was appointed Prime Minister for the Czech Republic. In July 1998, Prof. Klaus was elected President of the Czech Parliament/Chamber of Deputies for a four-year term.

His views on inflation, monetary and fiscal policies, comparative economic systems and economic transformation have been published in many scientific journals around the world. His experience and insight in international affairs make him a sought-after speaker. He is fluent in both German, English and Czech.